Julius Benford Jr. lovingly called “Bo” or “Jabo” by family and friends, was born in Lubbock Texas on November 13, 1950, to parents Julius Benford Sr. and Annie Bell Thomas. Julius was the second oldest of four brothers and two sisters. brothers; “Sonny”, IV, Larry and Michael; sisters Diane and Charlene. His siblings can go on and on with stories about how their brother was always there for them and had a heart as big as Texas. Throughout his life Julius always displayed his big heart and loving disposition to all.

In 1954, Julius and his parents moved from Lubbock Texas to Denver Colorado. There he matriculated through the Denver Public School system, Julius was loved by his teachers and classmates and there is where he found his talent as an exceptional athlete. In elementary and junior high school Julius developed solid friendships with Harold Mason, Raymond Fair, Donald Bell and Sam Moore that would grow far beyond adulthood. Julius often found solace in playing basketball on the blacktop at any neighborhood park or school. One may even have found “Jabo” playing at a local rec center with his buddys. As a boy growing up in northeast Denver Julius often had aspirations to bring his community together through athletics. Something that would come to flourishion later in his life. He would tell his son how much the Civil Rights movement affected him and how he always wanted to be a change agent like Malcom and Martin, but he would use athletics to do so.

As Julius grew into adolescence he began to grow into his own. In 1966, Julius began his secondary education at Manual High School. There he played JV basketball under Denver Legend Ed Calloway. Even though Julius’ basketball dreams ended after his Junior year that didn’t stop him from continuing to open his heart and build amazing friendships with is Thunderbolt classmates. After graduating in 1969, Julius set his sights on college, so the fall of 69’ Julius enrolled at Trinidad State Junior College. There he was able to rekindle his love of basketball again. Julius graduated from Trinidad State Junior College with an Associate of Arts degree.

After graduating from college Julius moved back to Denver where he returned to his beloved alma mater Manual. There he worked security. Students there were able to see first hand how big his heart was. The students there quickly drew to Julius and he was more than willing to be a big brother, uncle or even father figure to those students. Julius left Manual to take an Assistant Athletic Director position around the corner at Red Shield Community Center, another place he planted roots early in his life.
At Red Shield Julius began to realize his ministry as a coach. There he developed his skills and really began to pour into some amazing young men and women. With the blessing of Tony Sandoval, Julius was able to be promoted to Athletic Director for the Rec Center full time. His tenure there was well over twenty years. During that time he developed the Mile High Pro-Am basketball tournament where Pro’s from the Denver Nuggets, Utah Jazz, Houston Rockets and New York Knicks played alongside some of Denver’s best local talent. Julius also created the annual Martin Luther King Jr. basketball tournament where youth teams from all over the state and country participated in over the MLK Weekend. Julius also held the position of Assistant Head Basketball Coach at Mullen High School. There he was blessed with the opportunity to see several of his players graduate into Division I programs across the country.

During this time of his life Julius was blessed to be a father, Garrett Green who was five and then soon after Julius III. Julius was later blessed with a daughter Whitney Cooper. Julius loved being a dad, the enormous love he had for his children was never in question and was undeniable by his kids. His favorite phrase for his boys growing up was, “I’ll never make a difference between you and I’ll always treat you the same.” Julius was able to find a way to make his children feel like there was no difference between them. He also was able to make every child he coached feel the same. Julius took the opportunity to help develop his sons basketball skills and grew that into a very fulfilling coaching career. For over twenty years Julius believed that working with children was truly his call to ministry.

Henderson, Hill, Wortham, Green, Teel, Moore, Fair, Mason, Christian, Harris, Bell, Sproling, Buckman, Carey, Price, Jones, Wilson are just a few of the families Julius touched throughout his life. There wasn’t a time where Julius missed an opportunity help the homeless or speak to someone who needed uplift.

Julius, later in life married Ms. Julia Childs. Julie recalls falling in love with Julius when he was eight years old while seeing him play basketball on the playground in their neighborhood. On March 30, 2018 Julius and Julie made it official and become husband and wife in front of family and friends. They become inseparable until Julius’ end days. Julius talked about how strong his faith had become over the last five years. With his wife Julie’s help he was at piece in his last days knowing he was going to see The King. Julius loved Julie through his good days and bad, sickness and health and until they were departed.

Julius was particular about the way he ate. He’d spend several minutes prepping his food before he ate. He hated for his food to touch, he liked taking naps, he ate dessert before his entree, Julius’ mantra was to walk softly and carry a big stick. He also knew about speaking loud so you can be heard. Julius exemplified manhood. He stood with his head held high. Julius showed strength and humility in everything that he did. He loved hard on those around and in his circle. He made sure to let those he was close to know how much he cared and loved them.

Julius’ gap tooth smile and infectious laugh will be greatly missed by all that were blessed to know him. 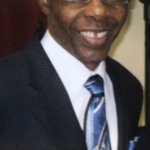