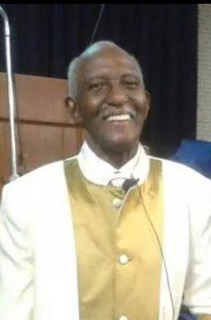 Henry Miles Jr was born March 25, 1930 in Greenwood, Mississippi to his parents Rev. Henry Miles Sr. and Lealer Bullock Miles. Henry was the 14th of 15 children born into this large family. He attended St. Mary’s, school/church until the third-grade. In the area of Greenwood Mississippi in the 1930’s teachers were not available to educate young black children in rural communities. Therefore, children were taught by members of the church who could read and write it was called Church/School. At the age of 13, the family relocated to St. Louis, Missouri.
As a young man, Henry loved boxing, and wanted to make it his career. However, his life took a different direction when he moved from a big city to a “cow town” Denver, Colorado. In 1957, at age 27 Henry met the love of his life, Thelma Ragsdale. They were united two years later in Holy Matrimony on June 13, 1959 in St Louis Missouri. As Pastor Henry Miles matured he later furthered his education which was inspired by Thelma Ragsdale-Miles. He then received his GED at Emily Griffith Opportunity College located in Denver Colorado.
They both had children prior to their marriage: Henry James, Clumbers Miles (deceased), Donald Ray (deceased), Paula, Diane, and Michael Wright. To this union came: Jaqueline, Laurie, David, Joseph, Mary and Vicki Miles. They raised them all as one big happy family. Together they shared 58 years of love.
Henry was called into ministry under the leadership of the late Pastor A.L. Pryor in St. Louis, Missouri. After settling in Colorado, he worked many jobs: elevator operator, meat packager, and construction. He began taking classes at Emily Griffin with his wife Thelma. She encouraged him to strive to better himself. Henry Miles was called by God and taught by God and was given a vision to start his ministry. He along with his wife, Thelma, worked together and organized Bethlehem Missionary Baptist Church. Pastor Miles did what men with the highest education could not do. Though he only had a third-grade education, he accomplished what others could not, because his education super ceded those who went to man’s college. Henry was obedient to the best instructor in the universe, our Lord and savior, Jesus Christ. He allowed God to order his steps.
Pastor Miles and Thelma Miles organized Bethlehem Missionary Baptist Church on April 12, 1964 in their home. There were many hardships that the Miles’ family had to endure, such as financial problems, naysayers, and other setbacks, but because of their faith these were only minor setbacks. Pastor Miles was told by God to leave those jobs and focus on his ministry work but because of his failure to obey, he was crushed on the job in 1970, which made him no longer able to work on other jobs. Pastor Miles was injured so badly, the doctors did not expect him to live. Even though things looked impossible for to the doctors, God had other plans for him. During his healing process, Pastor Miles continued to do God’s will, by preaching and teaching even though he was in a body cast and sitting in a wheelchair. The first time Pastor Miles flew in an airplane to St Louis was when his mother passed and he had two cast of both legs. Pastor Miles had very strong faith in God, so everything men said he wouldn’t be able to do, he did it by the grace of God. He was truly a man of faith and no doctor could tell him about limitations, when God has implemented his plan.

Pastor Henry Miles helped many people along his life journey. He was a very wise and generous man of God. He loved the word of God, his lovely wife, his family as well as his church family. Pastor Miles may not known how to read difficult material, but one thing he did know how to do was read his bible. He read his bible front to back and back to front. He could quote scripture and back it up with another scripture. Pastor Miles didn’t go to Bible school to get his doctorates; instead he was blessed with his PH. D from the Lord himself.
Henry‘s spiritual walk was living for God, teaching the Bible, telling his family and church family how to live for Christ. Henry’s passion in life was saving as many souls as possible. If you doubted him, he would and could always give you a scripture so you knew he wasn’t “psychologically mentally disturbed” as he would say.
Henry didn’t have the best singing voice but, he loved to sing. His top of the list favorite song was “His Eyes are on the Sparrow.” He would joke saying his nephew Nathaniel Black would teach him the words to Never Would Have Made It. He would tell the late Thelma Miles “put me in B flat” and she would play whatever he was singing. He would kill himself laughing afterwards because she would be able to keep up with his timing while playing.
Pastor Miles loved his work so much that he would have service no matter the weather conditions nor how he felt. He did his mission work for as long as the Lord allowed him. He visited those in the hospitals, nursing homes, and even those who were homebound. Where ever he was needed he was there. Pastor Miles was one you could reach at any hour of the day or night.
A true family man, Pastor enjoyed spending time with his wife and grandchildren. He used to take his grandchildren to school and pick them up. He would sing all the nursery rhymes. To know him was to know that he LOVED boxing with a passion. He would read the bible during the day and watch his boxing at night. As long as boxing was on, nothing else matter. His family will remember him as being a faithful and devoted husband, a pastor, a loving father to all and, a faithful child of God. Not only did he teach the word, but also made sure he lived by the word. To know Pastor Henry Miles was to know that he was very understanding and honest would even tell on himself when needed. We will also remember him as the root that held the church together.
Henry found peace and was called home to be with the Lord on Wednesday, May 29, 2019 surrounded by his family. He is preceded in death by his precious wife, Thelma Lee Miles, his parents, his 7 sisters: Gertrude, Ella Mae, Maggie Lean, Birdie Lee, Lucy Lee, Arneda, and Alice McGee. His five brothers Frank, Willie, Sinclair, Oliver, Porter. His two sons, Clumbers Miles and Donald Wright.