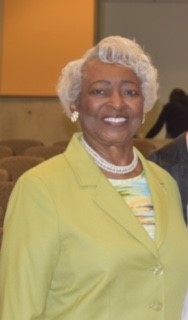 THE LIFE, LOVE AND LEGACY OF ERNESTINE MOORE BODY

Mrs. Ernestine Moore Body was born on July 12, 1932 to Max and Mary Hogan McGee as her parents’ only child. She grew up with aunts and uncles who were around her same age and who they treated as their sister. They remembered her as a gentle, kind, loving and caring sister l who would reach out to help others in need. Throughout her life, others would continue to say the same thing about‎ her.

Ernestine graduated from Bossier City Colored High School in Bossier City, Louisiana in 1950.‎ She was proud to share that despite the standard of segregated schools in that time and particularly in that part of the country, she and other students strived to do their best, and made great achievements. Her personal favorite was receiving an Award Certificate as a member of the All-State Chorus at the Southern University Rally of the Louisiana Interscholastic Athletic and Literary Association. She was a talented singer with a beautiful voice.

Always a lovingly devoted mother who was committed to her children, as a young adult, Ernestine called “Mom” or “Nanny” moved with her two children, Sharon and Michael, to Denver, Colorado where she met and married Kennith L. Body in 1957. To this union, Kennith, Jr. and Karey were born.

Ernestine’s commitment to serving as a role model for her adult children plus her belief in education led her to enroll in the Community College of Denver where she earned an Associate Degree in Inhalation Therapy Technology in 1973. She was successfully employed as a Pulmonary Therapist at Fitzsimons General Hospital for over 30 years attending to General (later US President) Dwight D. Eisenhower among many others.

Ernestine always displayed kindness behind her beautiful smile and shared words of wisdom when and where necessary. Everywhere she went and among countless people, she would meet and easily become their friend. She joined New Hope Baptist Church in 1959 where she was a very faithful member, having been a longtime member of the Choirs, and an active supporter of many Ministries. Her favorite scripture was the 23rd Psalm and her favorite songs were “Lamb of God” with Sharon as the soloist and “Order My Steps”.

Mrs. Body believed in giving service to others through her volunteer work for over ten years as a member of the Lions Club. Her hobbies included watching the “Soaps” with her grandson, shopping for the classy clothing she always wore, watching her favorite MLB Colorado Rockies, her favorite NFL Denver Broncos, and cheering on her favorite NBA basketball player, Steph Curry, and never missing watching “Family Feud”. She also enjoyed watching other sports teams and attended many games played by her church’s Softball Team where Sharon and Randell were key components.

“To be absent from the body is to be present with the Lord.” 2 Corinthians 5:6-8