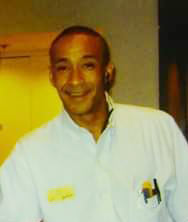 Craig Donald Jenkins was born on April 2, 1962, in Denver, Colorado to his parents Marion Louise Jenkins and Yasuko Jenkins. He was raised surrounded by his brothers and sister Marion, Alana, Lloyd and his identical twin Gregg.

As a child he enjoyed fishing and hunting. He later relocated to Vail, Colorado where he attended and graduated from Battle Mountain High School where he was also a football player.

Craig Jenkins was a proud Father of three sons. Craig Jr, Demonte, and Mishawn. He was also a Grandfather of three.

As a man of faith Craig was a member of Gethsemane Trinity Temple Church Of God In Christ.

By profession Craig was a hard construction worker – very dedicated and faithful to his service. In his free time he enjoyed spending time with his family, talking, laughing and joking.