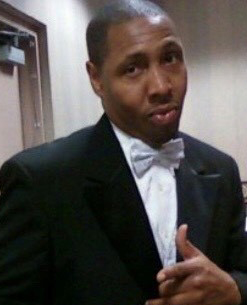 Charles Edward Marshall Jr. passed away on Thursday, January 10, 2019 at Littleton Adventist Hospital surrounded by his loving family and friends.  Charles was born on November 7, 1974 in Denver, Colorado.  He was the second child born to loving parents Tanya and Charles Marshall Sr.  Charles resided in Denver for most of his life with a brief stint in Arizona.

Charles began his educational journey at Aurora Seventh Day Adventist Christian School later transitioning into the Montbello School District.  In his later years, Charles attended Rangeview High School, ultimately obtaining his GED in 1995.  Reflective of his many interests, Charles pursued higher education at Oakwood College in Huntsville, AL and here in Colorado he attended both the Community College of Denver and the Art Institute.

After college, Charles worked in customer service for 10 plus years before deciding to venture out and pursue his artistic endeavors.  Charles expressed his artistic talent in various mediums including writing, drawing, furniture restoration and rapping.

Charles met Tumiesha Phillips in high school and the two became friends.  Eventually, the friendship evolved into love.  The two joined in holy matrimony on April 20, 2000.  They welcomed their beautiful baby girl, Shanyah Lena Marshall on January 17, 1999.  Although the relationship did not continue, they remained close friends and worked together to co-parent Shanyah.  On October 27, 2005, Charles welcomed his second child, Charles Edward Marshall III into the world.  Little Chuck was a blessing to his father.

Charles was adventurous and was always willing to step out and try new things.  Known for his storytelling, he loved to regale his friends and family with stories about his latest adventure.  Charles will be remembered for his fun-loving spirit, wit and loyalty to his family and friends.